Last night's dream, as usual, was in parts.

The earliest bit I recall, I was apparently in relationships with two folks, although I don't know if they knew about each other. One was an actual real-world someone who dated a pal of mine back in High School, and the other was an actual real-world someone whom I barely know, but is friends with a number of friends of mine. The only actual 'fooling around' scene in the dream was with the former, but there was a gist that it was going on with both of them.

Post-fooling around, I knew that the aurora borealis was going to be pretty strong, somewhere, that night, so I set out into a field to find it. Apparently it's not just in the sky like usual, but a thing that wanders around. I was going to check one way, but my cat (my actual real-world cat), who happened to be with me, was really rapt in attention at something atop a hill in the other direction. At first I thought the cat was just interested in some small animal or something, but then I remembered that cats can see ultraviolet better than humans can, so odds are, that's what she was noticing. She wasn't too pleased with me taking a while to work that out (as usual for my dreams, the cat was sentient).

Coming back in after skygazing, the large complex building I was residing in was starting to flood. I and a few other folks started to gather up folks to help them move to a higher floor, but in checking the first room, there was an unresponsive person who looked like Gabriel Garcia Marquez in a military dress uniform, instead. Apologizing for the confusion, I started to leave the room, but noticed a snake in the room, by the door. The snake had a hood like a cobra, but was red and fairly "stubby" (like you'd expect a gummi cobra to look like) as well as constantly out of focus. Avoiding the snake, I went to the next room and again found a fancy military Senor Marquez in a uniform and a blurry red short cobra. Pretty much every room after that had a cobra in it that, if it bit someone, turned them into a person who looked like Senior Marquez, wearing a uniform.

I've been wondering about the general cosmology of Supernatural, and if they'd worked out any sort of backstory/canon for the nature of the universe.

Initially, things seemed fine and fairly mundane. Then they introduced angels down the line, with mention of some angels being "only" six thousand years old (possibly hinting at Young Earth Creationism). Then they showed that non-Jehovah deities existed (EG: Odin, Ganesh, et cetera) and pre-dated Jehovah, which really threw a monkey-wrench into things. Then they had a being show up from Purgatory (generally regarded as a Jehovah construct) who pre-dated angels by about four thousand more years. In the episodes I started watching last night, some more folks were brought out of Purgatory who pre-dated both the creation of mankind and the creation of angels (which gets extra screwy, since it's generally accepted that angels assisted creation of the universe). Oh, and Death-as-a-being pre-dates everything.

Obviously, a little bit of a muddle.

But! But! Last night I had an epiphany!
It's been shown that angels can go back and mess with history, making a new "now" with only other divine beings being aware of the fact that history was messed with. If an angel can do it, a full-on deity should be able to, as well.

My current hypothesis is that when a given deity is in power, they tend to come up with their creation story, then go back in time and make reality match their story (with only other divine beings being in on the fact that it wasn't always that way).

This way, you get to have a fairly literal Young Earth Creationism gig going on, while also having all the other pantheons' stories being equally true in the greater scheme of things.

In seeing shows like 4400, Heroes, Alphas, Misfits, et cetera, I've always hoped someone would try a thing where the folks had powers that fit together for some big scheme/job that would be the season's metaplot arc. Something along the lines of the flying person drops the invulnerable person through the skylight so they can crack the door for the turns-into-water person who can.. you get the gist.

Now, if someone out there wants to steal this, some points of advice.

1) Have more than one season ending scheme/job that takes different combinations, on the offhand chance it gets renewed, so you need another setup (or different folks with different powers?)

2) Never have the last episode of a season cliffhang to the next. Have the start of the new season (if reusing the previous folks) finding our heroes wondering why they still have these powers.

3) Have part of the contract with the network be that if it's cancelled, you're allowed to release your arc notes/plans to the public.

It really seemed 4400 was going that way, but it never really did.

On my way to work today, I was heading down the steps to the Kenduskeag valley when there were some folks standing at the top. Someone was down at the bottom with his dog, talking with the folks up top about how the last step had been tossed down the hill (earlier this week it lost its mooring due to erosion and folks have been dragging it around). The guy offered that if one of the folks up top held his dog's leash, he'd clamber down the hill to snag the step. As the person came down the stairs, he assured them that his dog was perfectly safe and fine and all.

After walking past them, crossing the bridge, I was passed by a woman jogging towards them. Behind me, I could hear the dog start to give off slightly strangled barks, like you'd expect for a barking dog being restrained by a leash. The dog's owner started to shout to the jogging woman, "Hey! Stop running! He doesn't like it when people run!" (she had headphones on and couldn't hear him, but I couldn't exactly help out this situation -- also, I never heard any screams or clear-throated barks, so I figured it was safe to assume I couldn't have assisted).

You know that claim a while ago about how cats have a parasite thing in their droppings that makes folks go nuts in a way that turns them into crazy cat folks, thus making life easier for cats? I'm wondering if the same sort of thing should be looked for in dogs/dog-owners.

I hear situations like this far too frequently -- Oh yeah, the dog's perfectly friendly! [dramatic pause] ...unless you perform a fairly innocent action.

If only I could go back in time to the first attempt to domesticate wolves (thus leading to dogs) and instead point out a fox to the person. It'd only be a problem if you innocently had rodents and flightless birds running around your yard!

Around 2 AM, July 28th, I was getting out of work and heard a rather odd bird-call coming from around the corner of French & State street in downtown Bangor. At first, I thought it was possibly a parrot or cockatiel in someone's window, but wandering around seemed to find it coming from All Souls Congregationalist Church or thereabouts (which obviously doesn't dismiss the hypothesis of it being a pet bird that escaped).

For a description of what it sounded like, a fairly annoying and piercing 'Skraw!' followed by a trail of 'chuck chuck chuck' sounds. For my horrible attempts at imitating it, I've included an .mp3 of my rendition.

Yes, this was at two in the morning.

FYI, I sent it to two folks - the local Audubon Society Chapter, and the University o' Maine's Biology department.

Recently, this article was pointed out to me, which had this wonderful little way of encoding numbers in a way that's not exactly a simple replacement code, but close. It's the number-part of this chart (the letter one's not so useful, since it just works out to be a simple replacement code and that's that. Might as well use Dancing Men or Pig Pen). 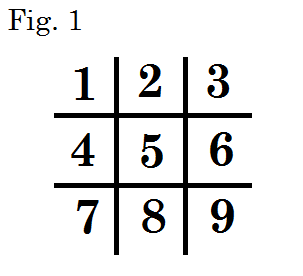 First, you do a little tic-tac-toe sort of hashmark/pound-sign affair and put the digits where they obviously should be. Chill on placing 'zero' there, since it's moot in this system. 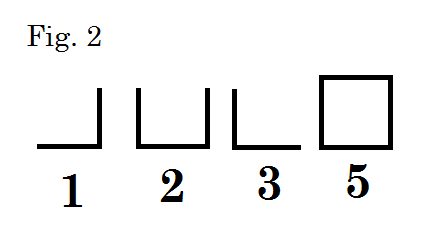 Second, to determine what symbol goes with which digit, you find the digit in the hashmark and pick its section, just like Pig Pen code. 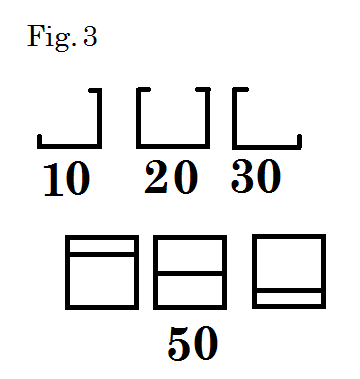 One tricky part kicks (as seen in Fig.3), where you add serifs (or lines, in the case of a 5 turning up) to the ends, with one set of serifs per multiple of ten. For 50, the line can go just about anywhere in there. 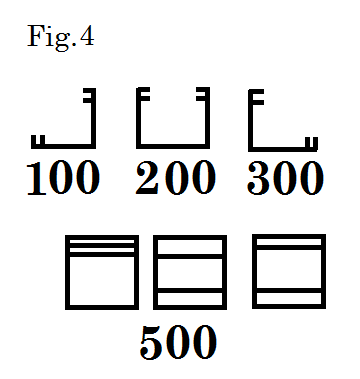 Obvs (in Fig.4), you just keep adding serifs/lines for each multiple of ten the root digit is being multiplied by. 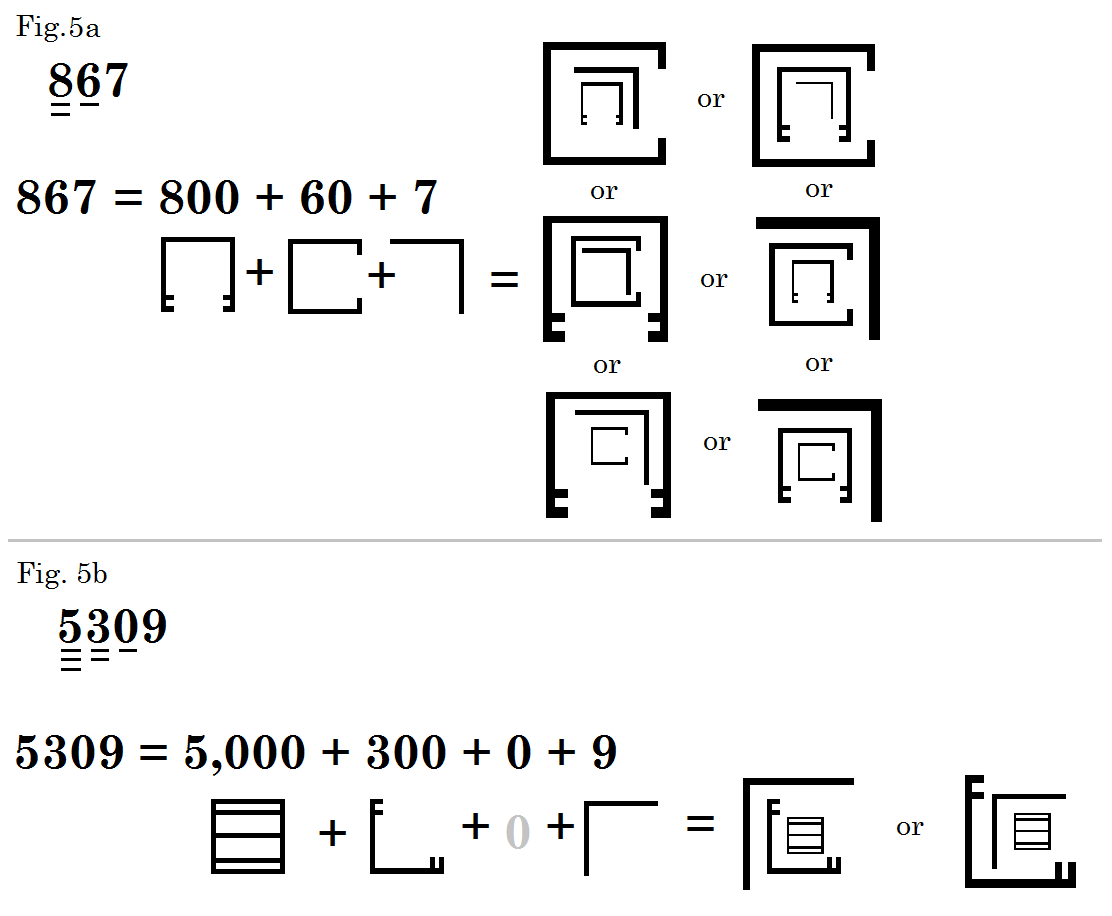 You take the symbols you've worked up, and then nest them. It doesn't really matter which ones are inside/outside which other ones, since you can tell the decimal place by the serifs/lines (Fig. 5a). In the case of a number with a zero in it, that's just skipped (Fig. 5b).

The problems are if you get more than four digits in a particular number, it gets really cluttery, you can't do anything that starts with a zero (so trying zip code 04401 is impossible), and things can get a little funky if you're dealing with 5059 or something else with multiple fives in there.

Frex, my Google Voice number (which has two fives in the final four digits):

Even if I had talked with this person (SPOILER: I didn't; it's junk mail), I'm not sure I could deal with someone who typed like this.

As pointed out by Neil Gaiman:

Last night's dream involved cartoon folks coming to life. Not so much in a Toontown sort of way, but more like when you see folks do macabre taxidermy, recreating Pokémon critters and suchlike.

In the part I remember, Pinky & the Brain showed up. I didn't get a good look at Pinky, but I unfortunately did for Brain. For those who know your Lovecraft? Brown Jenkins. For those who don't know your Lovecraft, imagine the creations in Island of Dr.Moreau, but critters with human bits instead of humans with critter bits. If you're into pictures:

...but with a face of a later-year Orson Welles (thank you, Maurice LeMarche).

I’ve had a heck of a time trying to find where this image originated. I found a number of hits with a Google Image Search, but had to check back month by month, since they don’t sort images by chronology. All I can tell is it gets lost in a morass of Tumblr and Soup.Io re-posts back mid-2010.

The reason I want to know is that it gave me the idea of, well… have you seen the draft-shots for modeling magazines, where they’ve taken the basic pictures and then someone has scribbled in notes about what to change post-production (Old-school, airbrush. These days, digital manipulation)? That, but in the picture itself. So there’d be a narrow strip of paper hanging from the hem of a skirt to the ground with “MAKE THESE LEGS LONGER” written on it. Somehow, the person’s hair itself would have, “MORE BODY” written on it.

I really like this idea, and might even do something with it. Just to make life easier, I’ll probably start with finding local folks who like the idea and then ask them what sort of post-production notes they’d like to have with/on them. Emphasis on the -s of ‘notes’, since just one note will make it look like a (de?)motivational poster.
Collapse